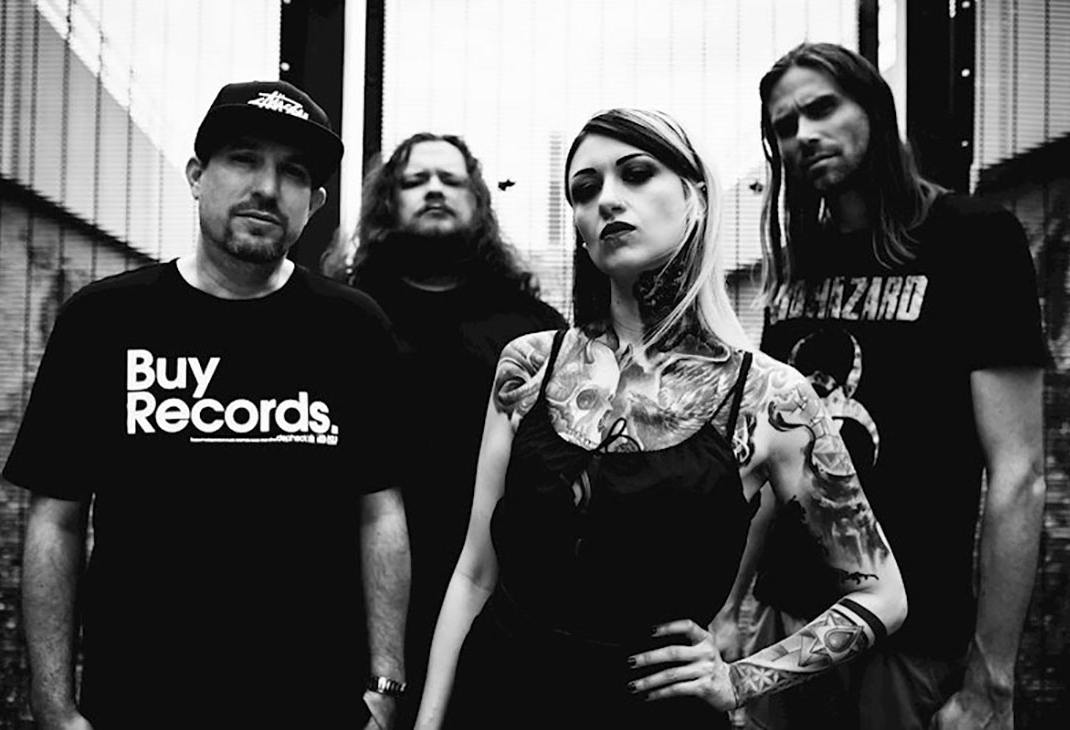 Do you want some? Cage Fight aren’t pulling any punches. Dealing in vicious, old school hardcore aggro, the anger and frustration of their self-titled debut album is the perfect catharsis for our times.
Originally started as little more than a bedroom project by TesseracT guitarist James Monteith and long-time friend and collaborator, bassist / MC Jon Reid, by their own admission Cage Fight were simply a project to unleash some frustration, and nostalgic tribute to the music of their youth, bands like Slayer, Terror, Hatebreed, Biohazard and Stampin’ Ground.

“I just started recording fun meat heavy riffs,” says James. “Over lockdown, I think we got the bones of three songs and a pile of riffs, but we didn’t really think beyond that.”

Quickly, though, the idea began to grow legs, as they shared the music they’d made among friends, and they realised it was too good not to do something more permanent with.

Bringing in drummer Nick Plews, Cage Fight were completed in February 2021 by the addition of singer Rachel Aspe, a French national who James met eight years ago when TesseracT and her former band Eths crossed paths. Spotting her doing a Black Dahlia Murder vocal cover on Instagram – via a post by that band’s singer Trevor Strnad, who himself appears on the track Eating Me Alive - James invited her in, and the band were complete.

The result is one of the most furious and angry hardcore records to emerge from the UK in years. And just as the band has become a more serious proposition, so too have the lyrics.

James continues “With Cage Fight, I really wanted to do something where I can really channel my frustration with things that are pissing me off right now. When the four of us came together, we all felt the same. It's a real outlet to have a rage about sh*t that's going on at the moment.”
Rachel agrees. “I cherish the ability to channel my anger through this outlet. In a world full of uncertainty and frustration this type of music was the only thing I found solace and balance in. These songs have a deep meaning for me and I hope this is something that other people can relate to.”

The themes Cage Fight are shouting about will be familiar to anyone who’s looked at the internet over the past couple of years: racism, injustice, political corruption, the divisions among people that COVID is fostering. The vessel into which Cage Fight put their frustrations is a perfect one: cathartic, electric, aggressive, bullish.

Jon comments: In the wake of the greatest media heist in modern British times and the fall out of the cataclysmic debacle that is Brexit, it seemed perfect stimulus to write lyrics that confronted the continued world of systemic racism, cultural divide and an antiquated class system wrapped up with personal mental health issues and the challenges of modern living”

Throughout the album, the theme of respect comes up a lot. In particular, on the song ‘Respect Ends’, which deals with Rachel’s experiences with inappropriate men and harassment, both online and in the real world.

“Rachel continues “That song is basically about men’s inappropriate behaviour that have I experienced. We shot a video in a bar and I’m harassed by a creepy guy; he takes things way too far.. and he gets his comeuppance”

The album’s artwork – a grabbing hand with the Cage Fight logo tattooed on the palm - visually portrays the violent rage at the core of the band’s music. Tattooed by Rachel, a tattoo artist by trade, the process of creating the image is as impactful as the final artwork itself, which can be seen in the video to the track ‘Killer’.

In a time where many bands are reliant on technology, Cage Fight have ditched click tracks, automation and backing tracks, and focus on pure visceral energy and aggression, resulting intensive and raw live show.

It all makes for a furious, short, sharp hardcore shock, a record with a heart as big as its fists.

Dukes up, Cage Fight are coming out swinging. - Candlelight Records

Check Out Videos from Cage Fight
Member(s):
Holy Sh*T, Did You See This?
View All
Recent Featured
View All