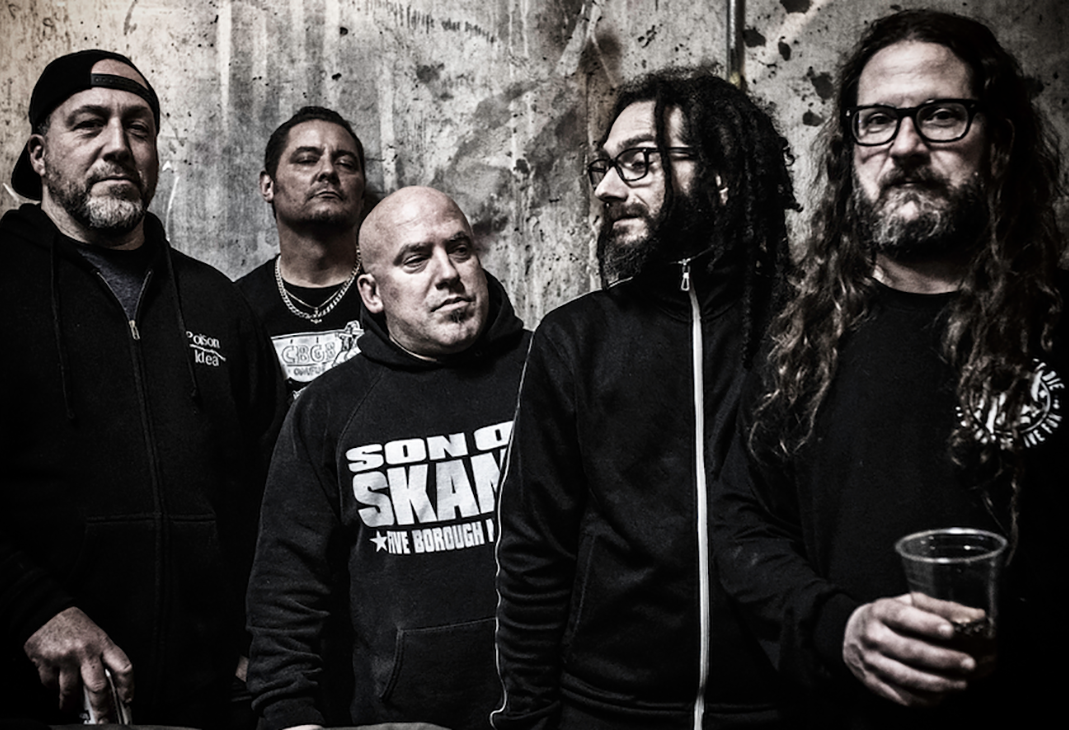 KINGS NEVER DIE has been described as true to sonic form, drawing from each member’s deep-rooted musical history and writing styles from classic NYHC to true Crossover Punk Rock.  While Kings Never Die’s members may seem familiar to many who have enjoyed  and loved the scene, the reality is.... (In the bands words) “nobody really cares what you’ve done when listening to a new band, It’s all about what we’re doing. Of course we respect our personal history and the  great people and bands we have been blessed to be apart of, but Kings Never Die is,  and always will be meant to stand on its own two feet.

HOW KND CAME TO BE

The short recap of how KND came to be was a phone conversation between Nastasi & Nieroda in Late 2018 which led to a get together at Larry’s place. Both contest that by the time Nastasi left that night, Kings Never Die was essentially born. ..........

The Story behind this is best described by guitarist, Larry Nieroda’s words when asked how KND came to be.

”Kings Never Die started in late 2018 when I called my friend Dan Nastasi to check in and see how he was doing”. “Dan and I share a couple mutual connections, as we both had stints playing guitar in Murphy’s Law, Nastasi back in the day 1989-1990 and myself from 2001-2004 and from time to time recently, 2018 Murphys Law gig opening for Misfits @ Prudential Center and just this year for the 2020 Japan Tour. Currently, I still play guitar in and for the band (STIGMA) with Vinnie Stigma. When I had first started playing for Vinnie, I had played guitar along side Sean Killkenny, who is Dan’s former guitar mate from Dog Eat Dog.  Dan actually still plays any and all US gig with DED, as well as most recently, (or at that time) had hooked up with Eddie Sutton, (Leeway) and was writng new music  for Eddie including the killer track ”Im Your Pusher” which at the time I reached out I knew was already  in the hopper and set to be released”.

“During our conversation, Dan had told me that he had actually been seriously ”back at writing” for about the past 2 years which sparked my interest because I myself was sitting on some new ideas but was waiting for the right situation for them.  Nastasi has always been known for his song writing, his old Mucky Pup days style of course were time pieces, and where he got started, and then the noticeable change in style while in and when they started Dog Eat Dog. 1991-1994 (the Warrant EP’ and the classic All Boro Kings Album), songs like Who’s The King, If These Are Good Times etc.  While we spoke we talked about new songs he had been working on and how he felt they were really strong and in his words, “a much harder Punk Rock - Hardcore style” then he had ever written in the past. Dan asked if I was interested in getting together and hear some of them, “Hell Yeah” was my response and within

days we were in my place with guitars playing through ideas each of us had. Honestly, It was Fun! Fun is why you get involved with playing music in the first place and it was basically “On” from that point”.

Kings Never Die was basically formed that day. Nastasi asked his longtime friend and band mate John Milnes to step in to get them started on Drums, Nieroda reached out to Jay Kalfin, whom he had worked with while in SubZero to play on the Bass. At first, Nastasi would scream along with what he visioned vocally to give a clear picture of how the Choruses and songs should feel during rehearsals.  It didn’t take long before Nastasi suggested bring in Vocalist Dylan Gadino who he had always highly regarded from the band Robots & Monsters and felt would be  exactly what they had envisioned vocally. Strong powerful voice and presence with the ability for the message and lyrics to be heard clearly and most importantly understood.  Dan reached out to Dylan who was good to go and  they immediately started working through songs, working on how the two voices together would work. Gadino immediately added additional vocal ideas to add that piece KND were looking for. From that point, the last piece that needed to be addressed was a permanent drummer since Milnes wasn’t in a position to take on a full time band role. The band is forever grateful to Milnes for getting them started on the correct path, giving his time and energy and tracking the initial recordings that eventually led to the Before My Time single and the Raise A Glass EP’. As fate would have it, at the bands debut show, Dec. 29th 2019, at historical A7 in New York City, a couple of unique conversations took place with former Agnostic Front drummer Steve Gallo who was in attendance. This thankfully led to completing the line up when Steve, who also has an impressive writing history, jumped in as permanent drummer for KND.

Considering KND first stepped into long time friend Dave Riser’s Rock Hard Studio, PA in April of 2019, they have certainly not wasted any time. After an introduction by Brick By Brick’s guitarist Mike Valente led to forming a relationship with Mario Cangemi and Upstate Records who released the bands first Single “Before My Time” in August 2019 and then the “Raise A Glass” EP’ in late January.  The band felt very strongly about cultivating Kings Never Die from the ground up and surrounding itself in a family atmosphere which Upstate  (a family run business) has certainly supplied. Nastasi said, “There’s something to be said about paying your dues, nothing is or should just be handed to you.  I’ve been a part of starting and creating the sound for two bands in my life, (MP & DED), I also said that I would never be apart of starting another band unless I thought it was that special, and would do it and commit to the

band, fans and the process correctly. We have found all of that in Kings Never Die and I am grateful and thankful for that. One phone call from a friend led to something I couldn’t be prouder of, there is value in that and we are certainly ”All In”. Nastasi also reflected on what many feel he missed out on when he had to depart from Dog Eat Dog right at the point when things really took off for the band. He says it was hard to walk away from something that he had such a big hand in creating musically, and more importantly his life long friends within the band, but that he also made a commitment to his soon to be wife and the wedding date (which landed directly in the middle of the Biohazard tour they were offered at that time). “I chalk it up to bad timing, period!  Of course I feel like I wish I was there, but, I also do not regret a thing.

I committed to marriage and then three beautiful children and the process of raising them, I fulfilled that commitment and couldn't be happier.  Now it is on to new goals and seeing things through with KND”.  Certainly everything is headed in the right direction. By most accounts the reaction and overall impression their debut Raise A Glass EP’ has far exceeded the bands expectations considering the 12 month time span since they first entered that  studio in PA. Upon the bands release in late Januaury,  they immediately hit the road, playing everywhere they could. There video for Raise A Glass (feat. Vinnie Stigma & Mike Gallo) had well over 100,000 views on media platforms. The EP’ has been referred to multiple times in reviews as fresh for 2020, and a breath of fresh air. Upon its Vinyl release in North America, Japan & Europe, it spent 5 weeks on Coretex Top 10,  Japan has been currently sold out. KND had continued  plans for multiple U.S tour runs in May and June and Europe after that.  Unfortunately, For now...All of us have had our everyday lives and social freedoms brought to a halt.

Regardless of the current situation, Kings Never Die are currently working on a Lyrical Video for their song “Never Know What You Might Find” and are and have always been working toward the release of their debut full length album, tentatively titled, “The Good Times & The Bad”.  The band are already prepared with over 20 songs and what they feel is the perfect Producer to bring the bands true sound to it.  The y have spent this unexpected down time to fine tune the material and are starting pre-production. The updated plan is for the band to enter the studio in late August. Drummer Steve Gallo said, “You can look at what is negative, glass half empty all you’d like, we view things a bit differently. We couldn’t be more excited right now with the songs and sound of the band, and are always going to look at the positives that can come out of every situation. We’ll be ready to deliver..... Glass is almost full over here”!

Although the Title and the Final Artwork are all just for promotional purposes, KND have proven they are progressive in their thinking. Call it what you want, PMA, or as Steve said, “Glass almost full” , were loving what were doing and we love who were doing it with and the people who dig it along the way.  Nastasi added, “Top to bottom, this is the most complete, best full album I have ever been involved with writing. As always, you want to create music for yourself first, then you want to offer it to others to enjoy as well”.  Some of the New album songs include, Were We Friends At All, Minor Threats, Before They Find You Dead, Forever Our Truth and tentatively titled Punk Rock Girl and possible title track, The Good  Times & The Bad, as well as songs un recorded that the band has already performed live, We Got Tonight To Fight, Old Times,  What Your Made of and consistent opener Stand For It All.  A temporary Promotional Use Only cover has been added below.. - Kings Never Die Official Website

Check Out Videos from Kings Never Die
Featured On
Member(s):
Holy Sh*T, Did You See This?
View All
Recent Featured
View All