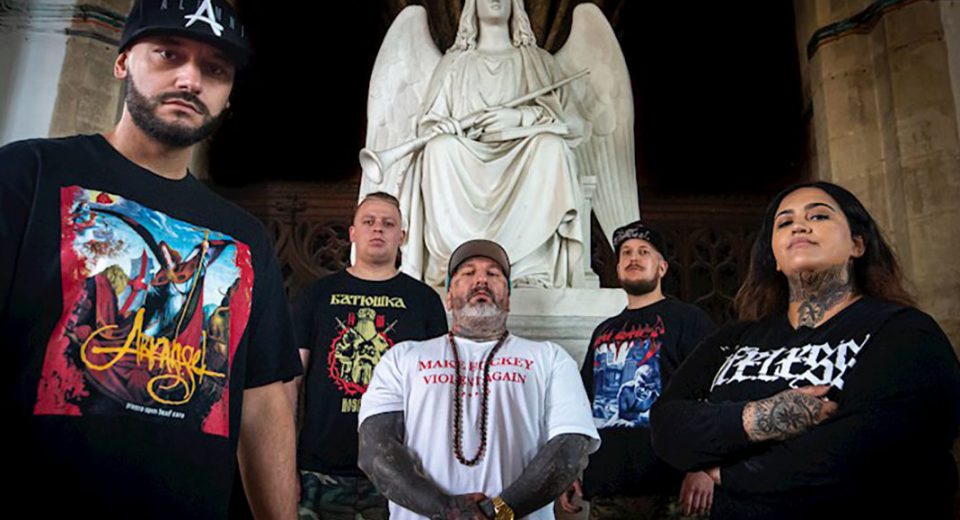 Dead Man's Chest has been a UK metallic hardcore force for going on fourteen years now. With a few records under their belt, they've recently released a two song EP, Dear God, via Upstate Records.

You've been around for awhile, but the Dear God EP on Upstate Records was the first I've heard of Dead Man's Chest. What's the brief history of the band? How long have you been at it?
DMC: Dead Man’s Chest started back in 2006. We’ve been back and forth with members since then. Andy (our drummer) has been the backbone for DMC. We have a solid core right now, everyone brings something to the table. We hope to keep this lineup going.

What were the direct influences for Dead Man's Chest?
DMC: I think we all have different bands that influence us, so I can’t speak for everyone. But I’d like to think Slayer, Suffocation, Hatebreed, Suicidal Tendencies. Just to name a few.

Is there an underlying, less obvious inspiration for the music you write?
DMC: We are pretty self-explanatory. DMC has been transparent from the get go. There’s no need to read between the lines. Just say what you want to say, when you want to say it and keep it simple. No need to sugar coat anything.

Dead Man's Chest seems to be a textbook example of combining equal parts modern hardcore and heavy metal. So how do you feel about being labeled metallic hardcore vs. metalcore? Does it really matter?
DMC: Metallic Hardcore is the best way to describe DMC. I think this is a sub-genre that a lot of people forget about. There are quite a few difference between metallic hardcore and metalcore. It’s mainly the band’s influences. I feel like people who write metalcore, usually like metal music more. Tends to be more technical. Whereas Metallic hardcore bands tend be started by actual hardcore kids, who usually have death metal influences. (Again this is just my personal observation)

How often do you play locally?
DMC: Not very often. Then again, we haven’t even played a show since October. We had a lot of things lined up, but unfortunately we’re interrupted due to this pandemic.

Are you able to tour much outside of the UK?
DMC: We had an east coast tour set up for the US in June, but it looks like that will be pushed back a bit. Things are up in the air for all bands at the moment, so we’ll see how this shit show of a virus plays out.

Your past records feature a lot of guest musicians. How have you made all these connections?
DMC: Probably has something to do with Andy being in the hardcore scene since 1947. Nah but for real, it’s all about friendships. Playing shows, networking, being an actual decent human being. These little things end up paying off in the long run. And also, it doesn’t hurt to send someone an email and ask haha

Does Dead Man's Chest have a "brother band" that you seem to find yourselves consistently linked together?
DMC: Too many bands to mention.

What are the best and worst parts of the UKHC scene?
DMC: I couldn’t really tell you, since I’m from America haha But I’m sure it’s has the same pros/cons like every scene does.

Any plans to tour internationally when all of this COVID-19 hopefully wraps up?
DMC: We’ll be hitting the US and EU for sure. Hopefully everything will fall back into place once the chaos is over.

How did you hook up with Upstate Records? Are they handling this record internationally as well?
DMC: We had a bunch of labels looking at releasing the EP. Upstate has treated our friends’ bands really well. They are brilliant, honest and hardworking people. They were able to work with us and bring our dreams for this record to life. They sorted everything out for the international distribution. We can’t thank them enough for all of the hard work they put into making this happen for us.

Dear God is only two songs. Can you tell me what's happening lyrically on both of these tracks?
DMC: The truth- that’s what’s happening. Take a look for yourself and you’ll see.

How does this all end for Dead Man's Chest?
DMC: It doesn’t.