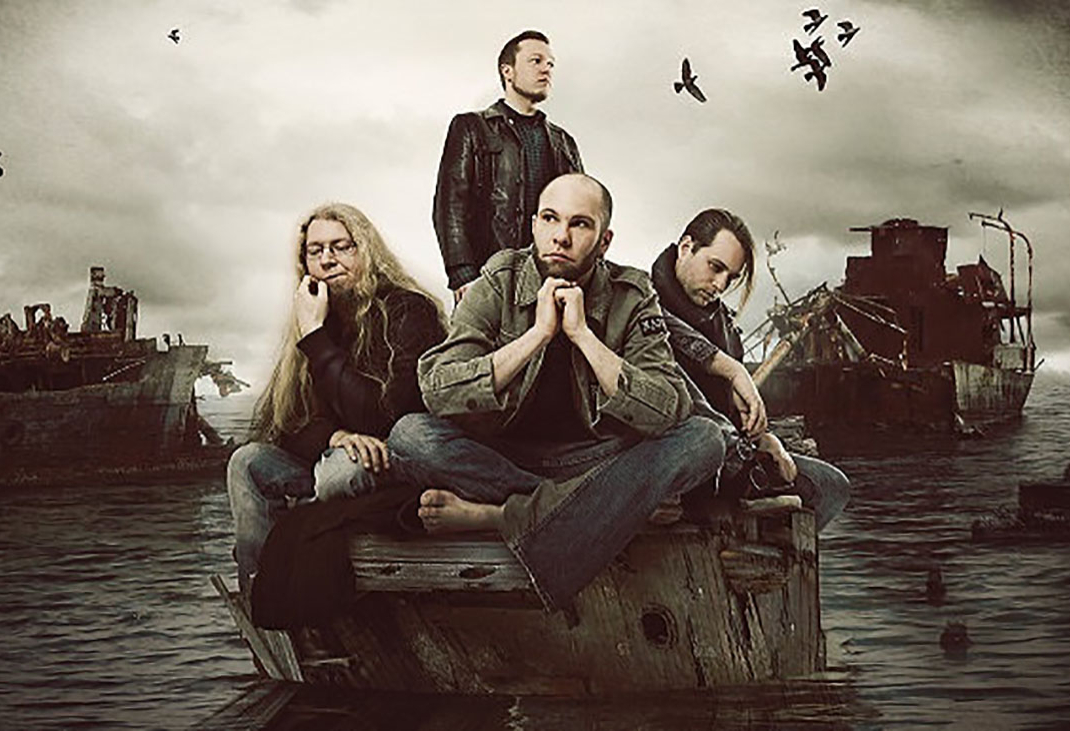 It's very probable some critics will push German nautical doom metallers Ahab's new album, The Boats Of The Glen Carrig, as "a heavy monolith," or possibly "a slow-moving lava flow," or any one of a dozen oft-used descriptions from the doom metal checklist. But let's be honest; there is something monolithic about the new album, it does possess some properties of a slow-moving lava flow... and the sound is reminiscent of something raised from the depths of the Marianas Trench. Indeed. And with that in mind we turn to far more important matters ...

Ahab are celebrating a decade in doom and melancholy. They've decided there's no better way to do so than unleash a very diverse, dynamic, and likely the gloomiest album of their career, The Boats Of The Glen Carrig.

Officially launched in 2004 with the release of their first demo-song 'The Stream' and their severely limited edition demo, The Oath (2005), the following year, Ahab have slowly but surely clawed their way from the depths of obscurity to a level of fan loyalty that many detractors of the doom genre figured was reserved for the well worn favourites like My Dying Bride, Skepticism, early Cathedral, and even earlier Paradise Lost. Ahab's progress has been characteristically - some might say appropriately - slow, but since the release of their first official full length album The Call Of The Wretched Sea in 2006, they have succeeded in retaining the interest of an extremely fickle music world and anchoring their own unique identity in the public eye.

"It does seem like that," says Cornelius Althammer (drums). "We've had about three years between every album but people seem to be patiently waiting for us.“ Singer/guitarist/co-founder Daniel Droste adds: “We also were lucky because we started when the doom scene was about to grow. We probably just were in the right place at the right time. I think we've made some non-doom fans along the way, too. "

The Boats Of The Glen Carrig is Ahab's biggest step yet in their 10 year career, and certainly their boldest. Holding true to form of literature-based albums, the band was inspired by the novel of the same name written by William Hope Hodgson, first published in 1907. It is widely regarded as "a survival and adventure story with elements of psychedelic horror in the form of weird weed monsters and dangerous snail-like creatures," thus making it a perfect backdrop for Ahab's doom and gloom approach. It wasn't enough, however, to create music that lives up to previous efforts, resulting in an album that boasts the fastest song Ahab has ever recorded (Red Foam (The Great Storm)), as well as their slowest and longest song (The Weedmen), and their first with only clean vocals (The Light In The Weed (Mary Madison)). The album takes the listener on a psychedelic journey loaded with surprising twists and turns.

"We had some discussions at the very beginning, when there were no songs at all, wondering if we should go a bit further in our songwriting," bassist Stephan Wandernoth admits. "On 'Red Foam', for example, it sounds more sludge-oriented than anything on The Giant (2012). Up until we had the rough mixes of the music Cornelius, Chris and me didn't have a clue what Daniel was going to sing. He didn't have anything in the practice room and did almost all of his vocal lines in the studio. Daniel's voice is more diverse than ever, bearing the classical Ahab vibes, but he's also doing more smooth clean vocals in the vein of the '80s post punk or shoegazing sound."

Ahab have previously interpreted classic written works such as Moby Dick (Herman Melville) and The Narrative Of Arthur Gordon Pym Of Nantucket (Edgar Allen Poe). The band has become a literary inspiration for some fans, inviting them to explore books they otherwise might have ignored entirely. The Boats Of The Glen Carrig continues this tradition after a fan on Facebook gave Ahab's members a tip about books by Hodgson.

"I was thinking of Das Boot (The Boat) at first, but we didn't think it would fit Ahab at this point of our career," says Christian Hector (lyricist/guitarist/co-founder). "We were looking at several books, including Die Entdeckung der Langsamkeit (The Discovery Of Slowness) and thought it would fit perfectly in terms of doom, just not in terms of our nautical theme."

The Boats Of The Glen Carrig turned out to be a perfect fit for the Ahab concept, with Droste and the band taking point in writing music and Hector writing the lyrics. Recordings took place at Rama Studio in Mannheim, Germany in a semi-live-off-the-floor execution, with Althammer and Wandernoth recording their parts at the same time, followed by Droste and Hector's guitar sections done in similar fashion. Afterwards the entire production was mixed on an analogue desk to gain a warmer and fuller sound.

As for covering the Alan Parson's Project - their first cover song - Ahab offers up yet another twist with their rendition of 'The Turn Of A Friendly Card' featuring Olav Iversen of norwegian doom rockers Sahg on lead vocals. The track has been doomed accordingly so as to bear the Ahab coat-of-arms, but Ahab make no apologies for stepping completely out of the box and possibly giving some fans a heart attack along the way.

Check Out Videos from Ahab
Member(s):
Holy Sh*T, Did You See This?
View All
Recent Featured
View All