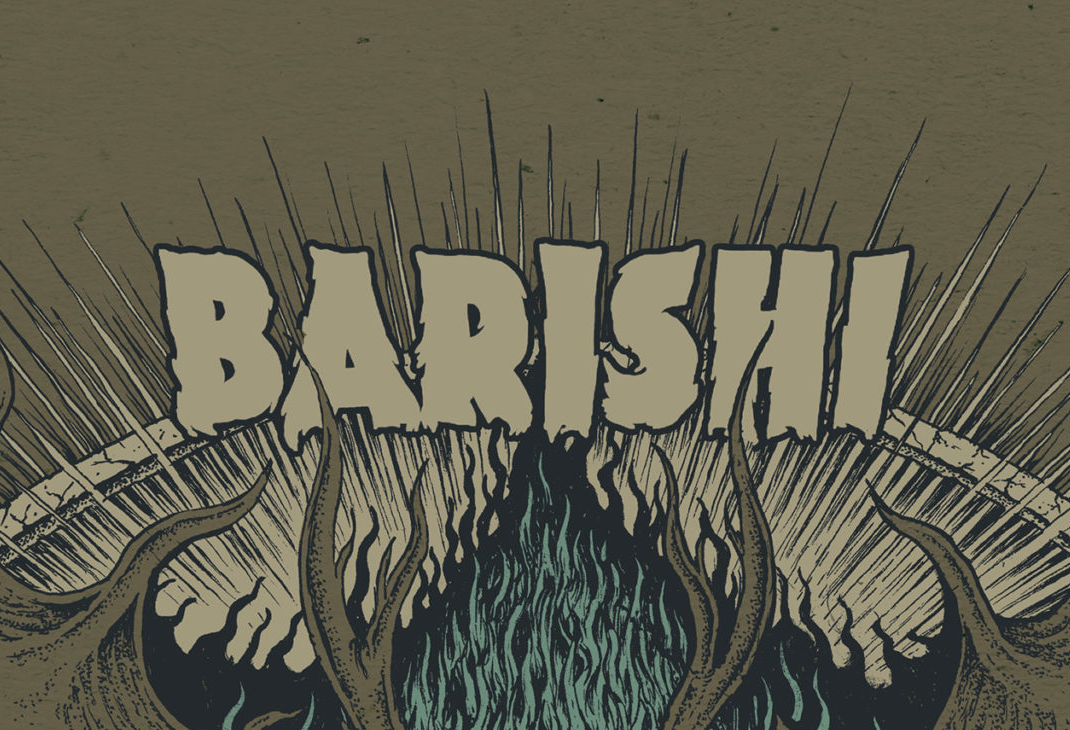 From Jamaica, VT Season Of Mist Since 04/2010
Find Barishi

Chronologically speaking, while Graham Brooks falls into the generational social construct known as “the millennial,” in actuality the Barishi guitarist/vocalist is an old soul, wise and talented beyond his years. Sure, he’s got an all-in-one cellular device in his pocket like just about everyone else on the planet, but you’ll rarely find him obsessively staring into it unless necessary. He was scouring used book and record stores for classics long before it was deemed cool by the hipsters of his cohort and when it comes time to actually listening to his vinyl finds – instead of mounting them for show or posting “Look at what I bought” online missives – he prefers lengthy, involved and protracted pieces of music in direct opposition to the quick fixes required to sate the miniscule attention spans of kids these days.

Furthermore, when Brooks’ name comes up in conversation, a soon-to-be classic yarn quickly follows: last year, he was asked to provide a guest spot solo record on Cable’s Take the Stairs to Hell album. Instead of utilizing modern and available technology and facelessly recording and emailing in his contribution, the worryingly tall gentle giant drove five hours non-stop from his home in central Vermont to a Boston recording studio, laid down his solo in a matter of minutes then almost immediately got back in his car and drove the five hours home. Without a hint of self-consciousness or ironic arrogance, he’ll divulge, “I definitely have an interest in old stuff. I guess people would call me an atavist. I like to read about archeology and history and old empires and stuff like that. I remember hearing someone talk about the fleeting nature of smoke and its age throughout time and that seemed interesting to me.”

This is the launch pad for Barishi’s newest album, Old Smoke. The Green Mountain State metallic shape-shifters’ third album roils along with feet in both the distant past and foreseeable future. The record is a fulcrum for the conglomeration and combination of metal from black, progressive, doom and sludge subgenres aligned with a variety of rock musics, including classic, roots, Americana and indie. For Barishi, there are no sonic barriers, no musical borders, everything is welcome and the result of throwing all available ingredients into a melting pot to create a powerful sum of parts. It’s a notion that grizzled urbanites and dichotomous us-against-them thinkers might view as achingly naive or treacherously liberal, but in the alchemical context of novel robustness emerging from the distillation of the best of disparate parts, Old Smoke exists as a beacon of light and strength. This is something Brooks attributes not only to the experience the band has gained since forming in 2010, but also the isolation of growing up as hopeful metalheads in rural Vermont.

As a pre-teen, Brooks’ family moved him to the tiny village of West Dover in order to live and eventually work on the family farm, where he lives and works to this day. While precociously and proudly sporting an Iron Maiden shirt at the grocery store one day, he was spotted by, and became friends with, Dylan Blake and the two joined forces when they ended up at the same high school in town.

“Dylan was known around as a drum wizard, I played guitar and [bassist] John [Kelley] got into metal a little later, but we were always friends so we just started rocking out together and have just stuck with it.

“Early on, we didn’t know anybody or how to get shows until this guy in Burlington started running this thing called Metal Mondays at a club called Nectars, which is the place Phish got their start at,” he says about the band’s primordial age. “That was where we were able to become a little more professional, figure out what we were doing and what we wanted to do. But Vermont’s cool because it’s so isolated and because there’s not a lot to do people come out to metal shows. Some old hippie will come out and have a great time just because that’s what’s happening in town. It’s small enough that there are no scene politics with this genre of kids versus that genre of kids; if there’s a show, people go to it. I think that attitude has allowed us to do our own thing while playing to everybody. Once in a while I’ll talk to somebody from a big city and they’ll mention the woes of trying to play to fans of a certain subgenre and how it never goes over. We don’t really have that in Vermont.”

Originally an instrumental band called Atlatl, the band joined forces with vocalist Sascha Simms and switched to the Barishi moniker in 2012. The then-quartet recorded and self-released a self-titled album in 2013 which caught the eye and ear of the likes of Decibel, Metal Hammer, New Noise, and, most importantly, Season of Mist. Being offered a recording contract slathered the Barishi camp in surprise (“We had done a fair bit of DIY touring, but it wasn’t like we were the big local band or had any buzz at all”) and sparked a growing ambition which begat the band’s 2016 album, Blood from the Lion’s Mouth. Shortly after the debut’s release though, Simms and the band parted ways which put Barishi in a holding pattern for a few months until they decided to stop looking for a replacement and fill the position internally.

“We tried a few other singers until I ended up grabbing the vocal reins. There weren’t hordes of disappointed fans or protesting crowds of Sascha loyalists,” Brooks says with a self-deprecating laugh, “so it made it easier to make the sort of identity change that most bands would worry about. Plus, it was hard to find people willing to give up as much as you have to and put in the work to be in a band.”

Once they traversed the hurdle of Simms’ departure, the now-trio discovered a new side of the band. Now that they didn’t have to concern themselves with what to do with a vocalist during lengthy instrumental parts, the songs got longer, more exploratory, grandiose and epic. Add on to that the fact that Old Smoke was gestated over a three year period and it becomes clear why this album brims with a monumental magnanimity.

“Not having a vocalist meant we could do our thing a little more. This was also the first time we demo-ed things extensively and through that process I was able to get a better perspective on the songs and shape them a little bit more towards something we’d want to listen to. I remember having a conversation with a friend about our shared love of Iron Maiden and one of us said something about Maiden being one of those bands that, when you put on a song, you instantly feel like you’re going on a quest. I thought that was bad ass and really wanted to write songs that could be considered ‘quest-worthy.’ I’d say that was a big thing when we were writing these songs: writing longer songs that went somewhere without making them seem cumbersome.”

Despite the excellence of Old Smoke, Barishi is humble and fully cognizant of their position as low rung on the ladder at Season of Mist, in particular, and in the metal scene, in general. Brooks reveals without hesitation that “I’m still surprised we weren’t dropped after losing a charismatic frontman like Sascha,” and that “We’re still new to and nervous about playing big markets like NYC” despite recent tours with Weedeater and Tombs. But with tracks like the lassoed meandering of awesome album opener “The Silent Circle,” the sinister black metal/noise rock slashing of “The Longhunter” and the sky-opening prog-metal enormity of the title track leading the charge, Old Smoke is set to make an indelible mark on the metal scene; one dripping with passion for the art of progressive song writing, honest creative expression and the hunt for one’s individual voice while paying homage to the well-worn parts of record collections.

“A big goal we have is having the band catch up to our tastes in music. Sometimes people have good taste in music, but what they create doesn’t always reflect the quality of that taste. I like to think I have good taste in music and I think we’re starting to reflect that in the music we make. There are bands we really respect that can write super-long, beautiful songs you can listen to and it sucks if you get interrupted because you want to listen to the whole thing in one shot. We want to have songs like that, songs you look forward to listening to. We also want to have an enjoyable creative process in creating something that sits well with us; to make something that survives the long term and is a fair representation of the stuff we’re into.”

Old Smoke it is, then! - Kevin Stewart-Panko

Check Out Videos from Barishi
Member(s):
Holy Sh*T, Did You See This?
View All
Recent Featured
View All