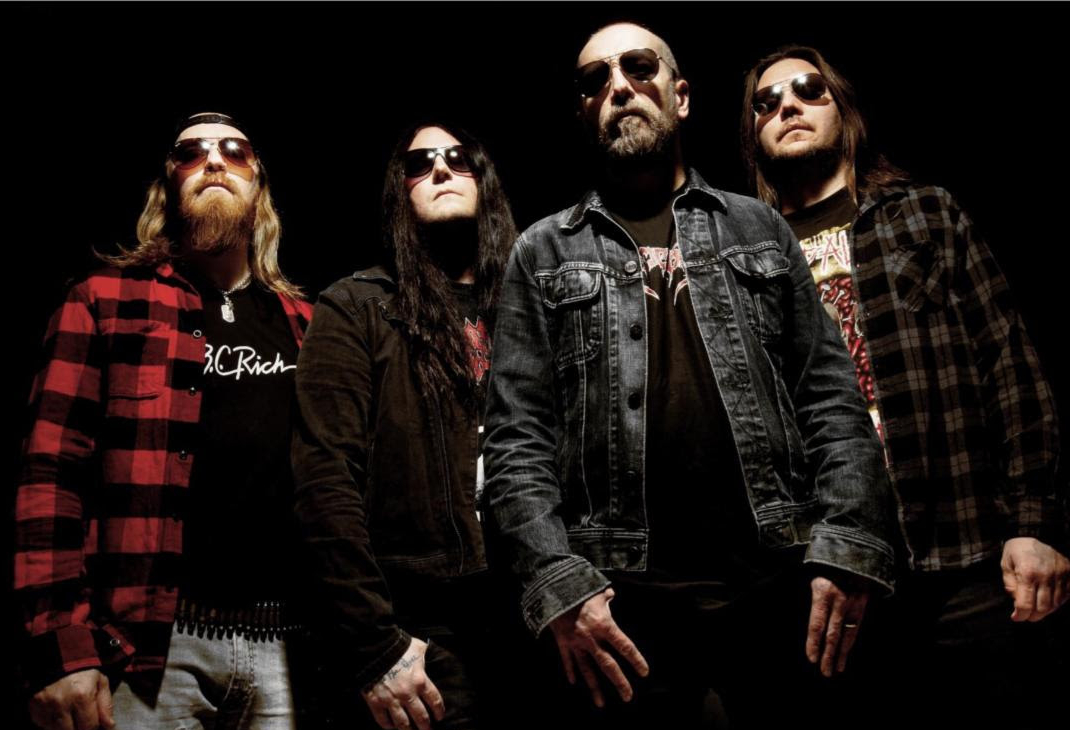 Death is fucking everywhere. It’s time for another deep dive into the horrors of mortality and the foul side of the supernatural. It’s time for Survival Of The Sickest, the sixth full-length album from Bloodbath, Sweden’s undisputed masters of old school death metal.

Bloodbath began life as a humble tribute. Formed by Jonas Renkse and Anders Nyström (both of Katatonia), Mikael Åkerfeldt (Opeth) and Dan Swanö (Edge Of Sanity) in 1998, they devoted themselves to resurrecting the increasingly forgotten art of pure death metal. Inspired by the greats and grotesques of the Swedish and Florida scenes, Bloodbath pooled their talents and discovered that they were more than equal to the achievements of the genre’s revered ancient gods. Kicking off with the release of four-track EP Breeding Death at the turn of the century, the Swedes have since evolved and mutated multiple times, releasing a succession of peerless, face-ripping death metal masterpieces along the way. Whether fronted by Åkerfeldt (on seminal debut Resurrection Through Carnage and merciless third album The Fathomless Mastery), or by Hypocrisy’s Peter Tägtgren (on 2004’s crushing Nightmares Made Flesh), Bloodbath steadily became a revered benchmark for deathly, old school evangelism.

In 2014, Bloodbath unveiled a new frontman – legendary Paradise Lost vocalist Nick Holmes, now redubbed Old Nick – and yet another macabre musical evolution. With a line-up of Renkse, Nyström, Per ‘Sodomizer’ Eriksson, Martin ‘Axe’ Axenrot and Holmes, the only way to go was grim. Darker and nastier than any previous record, Grand Morbid Funeral was widely hailed as a masterpiece, and a new era had begun. Three years later, the maliciously blackened death tirade of The Arrow Of Satan Is Drawn took Bloodbath even deeper into blasphemous, bloodstained depths, adding yet another gleaming gem to one of death metal’s most impressive catalogues.

Fast forward to 2022 and the world is in flames. Survival Of The Sickest offers no respite from the horrors of reality. Instead, with the addition of new guitarist Tomas ‘Plytet’ Åkvik (Lik) onboard, Bloodbath’s latest and greatest album gleefully confronts the slavering ghoul lurking in the shadows, and treats him to ten songs of ripping death metal frenzy. From the thuggish brain-smash of opener Zombie Inferno, to the bleak, obsidian ooze of the closing No God Before Me, Survival Of The Sickest is the sound of a great band on blistering form.

“We started writing during the second half of lockdown. It was all quite easy going, just file sharing and all the usual stuff you luckily can do when being thousands of miles apart,” says Nick Holmes. “I usually write all of my stuff with Anders, and Jonas writes all his own tunes. Our new guitar player Tomas, has written a couple of songs on there too. We had plenty of time to work on everything. Lockdown did us a favour!”

In contrast with The Arrow Of Satan Is Drawn, which borrowed heavily from the blackened end of the death metal world, the new Bloodbath goes straight for the jugular in true old school fashion. With strong echoes of everything from Morbid Angel and Death through to Deicide and Obituary, songs like the rampaging Putrefying Corpse, the disgustingly slow and heavy Dead Parade, and the deliciously twisted Tales Of Melting Flesh breathe fresh fire into an arcane, perpetually rotting formula.

“I guess we were going back for more of the Florida sound and style this time,” Holmes agrees. “We also decided to drop the make-up for this new chapter. It was fun at first, but it had run its course, so we’ve jettisoned all of that now. All aspects considered, this album is probably closest to Nightmares Made Flesh, that same sort of vibe. I honestly think it’s the best album I’ve done with Bloodbath. You tend to say that with new records, but I absolutely love this one. It’s super heavy!”

Alongside Bloodbath’s official alumni, Survival Of The Sickest boasts a smattering of irresistible cameos from the great, good and ghoulish of the metal underground.

“We’ve got some great guests on there, too. Barney from Napalm Death is on one song, and we got Marc from Morgoth as well as Luc from Gorguts on a few others. We got people to sing certain parts, just to add a different texture. Barney’s bit really suits his voice and his style. I think you can tell we had a lot of fun writing this one. It’s super heavy and in your face, so hopefully it’ll do the trick.”

In terms of subject matter, Bloodbath have always stared death in the face. On Survival Of The Sickest they evoke their most horrifying sonic scenarios to date, from the death-by-munching nightmare of Malignant Maggot Therapy, to the murderous nihilism of Affliction Of Extinction. Revelling in bloodstained darkness has always been the Bloodbath way, but this time they really sound like they are having fun.

“This album is predominantly about zombies, really!,” laughs Holmes. “I’d say the songs are a little more thoughtful on this one. We tackle some environmental stuff as well as the usual gore, but it’s all die-hard horror, and I love having fun with that. The titles say it all, you know? The artwork is pretty gory too, so it all does what it says on the tin.”

A glorious comeback from a legendarily wicked musical force, Survival Of The Sickest provides yet more proof that Bloodbath are the kings of the old school. This is death metal at its ugly best: vicious, unrelenting and irrevocably sworn to the black. Time for another Bloodbath!

Check Out Videos from Bloodbath
Member(s):
Holy Sh*T, Did You See This?
View All
Recent Featured
View All