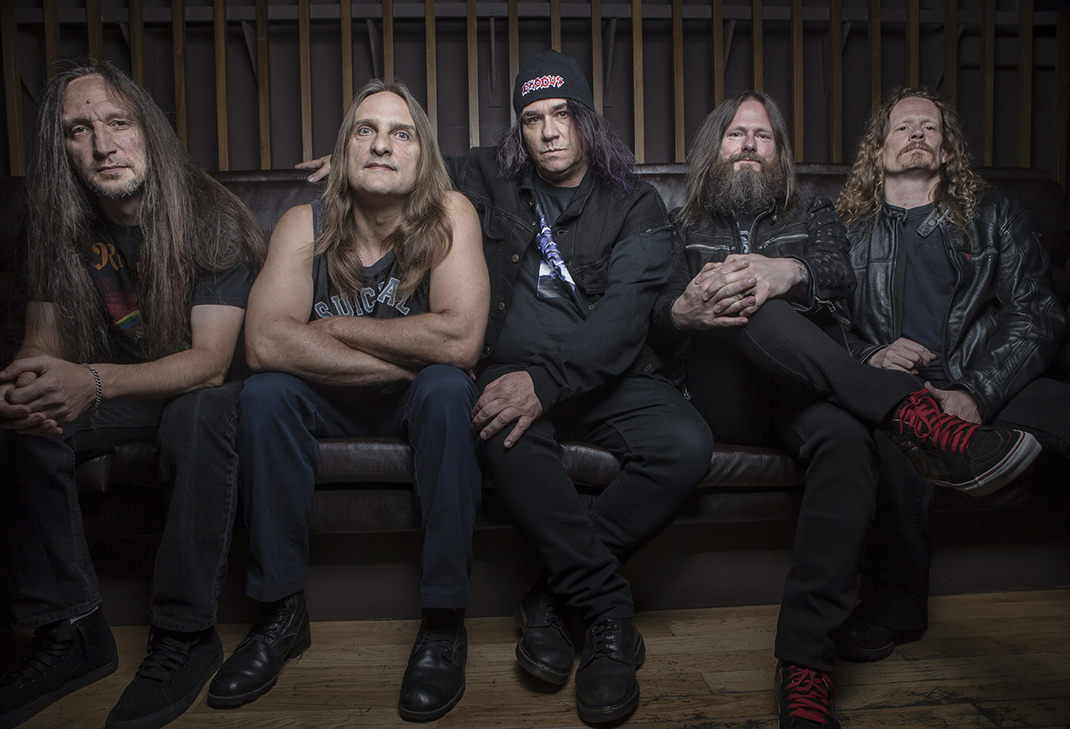 For thousands of years the word EXODUS has been used to describe a massive human migration; embarking upon an epic journey and change filled with such power that the earth itself shakes upon its commencement. All such grand exploits begin with a soft awareness for what truly lies beyond, yet 4 decades ago EXODUS had no way of knowing the extent to which their band would rise, conquer, trip up, and rise again. The formation of the beast we now call EXODUS began in Richmond California 1979, and although many started their journey as fans a few years down the line, there is no debating that the early 80’s was a time for major growth in the world of Thrash Metal, especially in the Bay Area of California. Being only kids at the time, all just learning to use their instruments, Tom Hunting, Kirk Hammett, Tim Agnello, and Keith Stewart began covering classic rock, punk rock, and Iron Maiden songs at backyard birthday parties. The less technologically inclined, music sharing, tape trading ways of the 70’s were still in full force and it was this striving for the acquisition of new sound that fiercely fueled the band’s tenacity to learn, play, and eventually write.

Although Kirk Hammett famously left the band before their genre defining debut, “BONDED BY BLOOD,” Guitarist and lead writer Gary Holt had become a deep rooted foundation in the band, in 1982 EXODUS added the unparalleled, and infamous voice of the now tragically deceased Paul Baloff, solidifying their sound and putting what would become one of the most infamous Thrash albums of all time, on the map. “We were living for heavy metal, it was rad. It was a great time to be alive” remembers Gary Holt. With a new and semi-solid line up of Hunting, Holt, Baloff, Hunolt, and McKillop, “BONDED BY BLOOD” was finally released to the world in 1985. The importance of this album, and its influence on all the heavy metal composers that we have grown to love and respect today, can never be understated for both fans, and the guys in the band. “A lot of bands hit their peak a couple albums in, we busted right out the gates with this face melting, thrash masterpiece,” Holt recalls, “that first time when the shipment came in, and I opened the box, and I was holding that BONDED BY BLOOD vinyl in my hands… that’s a feeling you’ll never replicate. That’s pretty amazing.” In 1987, the release of their second full length album “Pleasures Of The Flesh” was preceded by Baloff leaving, and current lead vocalist Steve Zetro Souza joining the band and solidifying his place as the voice of EXODUS. 8 more studio albums would follow, and through more member switches, time off, family illness, and even death would try to interfere with the progression of the band, they still exist, write music, and garner respect as true royalty in today’s kingdom of heavy metal.

Now celebrating 40 years as a band, truly looking back and reflecting upon the massive history of EXODUS can reignite some wildly significant memories. “What stands out most to me was getting to play our first tour with Venom in 1985, and then going to Europe with them afterwards,” reflects founder and drummer Tom Hunting. “Being 19-20 years old with a double decker bus, traveling the world with no real concept of time or budget, we were just like ‘wow, this is awesome.’” This small town California band saw an entirely new world when they began networking and globetrotting with their idols. They came into opportunity and experience that would forever catapult their career. “Over in Europe, playing the Dynamo Festival for the first time in 1989 in front of what must have been 20,000 people watching us… that was life changing,” says Hunting.

Currently, the EXODUS lineup is comprised of: Tom Hunting on Drums, Gary Holt on Guitar, Lee Altus on Guitar, Jack Gibson on Bass, and Steve “Zetro” Souza as lead vocalist. All these years and EXODUS still boast a similar writing process to what they started out with. Although technology has made it so that the recording and mixing processes are less time consuming, the main change is really just that “[they] respect what [they] do a lot more,” states Hunting. “We’ve humbled ourselves to the journey and consider ourselves lucky to do what we do, but our creative process is still the same. Basically drums, guitar concepts; those are the starting point. After the music begins to take place we all process it and write together. When we were kids it was about the party. Now that we’re men, we’re in it more for the journey.” “To this day I still write a riff the way I did in the beginning,” explains Holt. “I write to make myself happy and I’m still always looking for that sick, brutal ass riff; it hasn’t changed. I kinda stick with my guns on how I do things.” With Holt just finishing up his world famous final run with SLAYER, the supportive network of friends and musicians that is EXODUS patiently await fully re-submerging themselves into a new record. With new ideas and riffs already in the works, not only can these masters of metal assure us upcoming new music, but an abundance of world-wide touring is inevitable. “I can’t tell you how long it’ll go on,” says Hunting, “the fuse is definitely shorter. We’re obviously closer to where it ends than where it started… but we’ll take it one record at a time. As long as we feel good about what we’re doing, there’s good things happening right now in this genre of music, and we want to be a part of that. A lot of bands want to retire but that’s not us. The potential for our next record could be career defining. We’re taking our time and not rushing any songs.”

Regardless of how us metalheads may see it, Heavy Metal will forever be one of the more niche genres in the music industry. Longevity is the key here; to have reigned for over 40 years and created 10 unique, game changing, full length albums amidst the even smaller bailiwick of Thrash Metal. EXODUS not only remain unwavering in their delivery, but in their strength and progression as a successful and unique sonic endeavor that make your every bone rattle and your blood churn in the best of ways. - Exodus Official Website

Check Out Videos from Exodus
Member(s):
Holy Sh*T, Did You See This?
View All
Recent Featured
View All