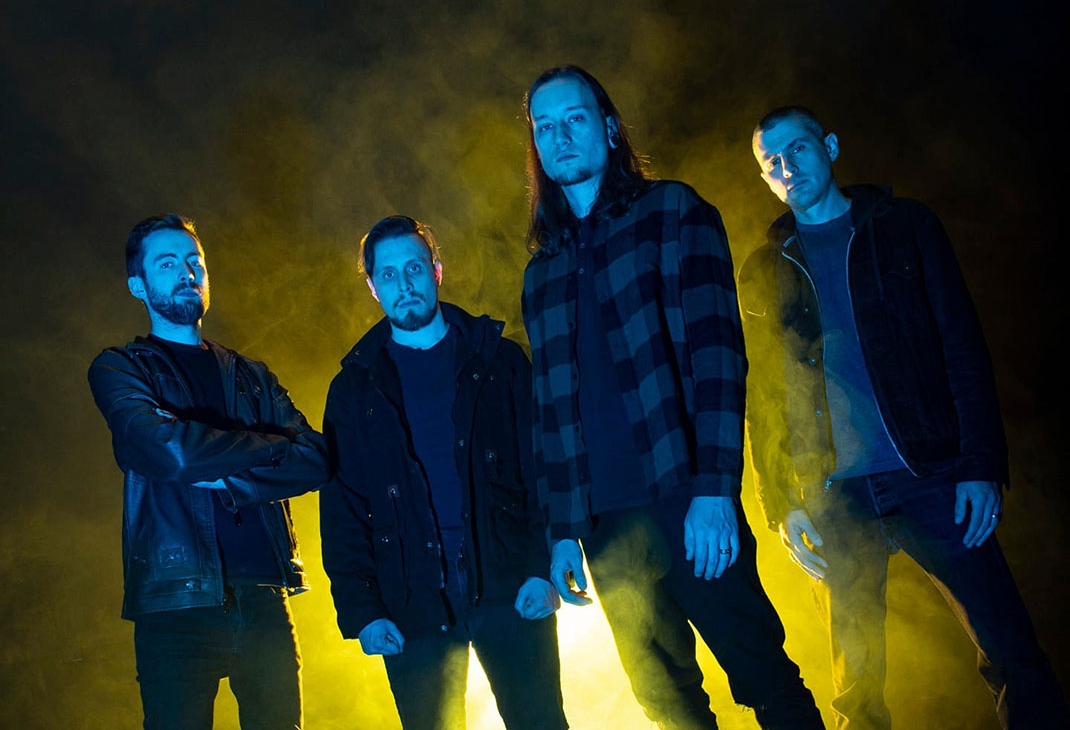 Tech-metal outfit Fallujah intensify their metallic dynamism on stunning new album, Empyrean. Built on an “all killer, no filler” maxim, the Bay Area-based quartet delivered just that on album number five. From video single “Radiant Ascension” and “Embrace Oblivion” to “Soulbreaker” and “Mindless Omnipotent Master,” Empyrean is breathtaking in atmospheric expanse and impressive in sophistication. Fallujah’s overhauled lineup has contributed massively to the level-up on display. Primary songwriter/guitarist Scott Carstairs and compeer/drummer Andrew Baird enlisted Archaeologist’s Kyle Schaefer and Evan Brewer (formerly Entheos/The Faceless) as their new vocalist and bassist, respectively. Technicians at heart but looking for old flames, Fallujah rediscovered their muse on Empyrean.“After such an experimental expression [with Undying Light], we sat down to write Empyrean completely refreshed and inspired,” reveals Carstairs. “It was like the musical tension of the last decade had been released, and we were ready to achieve goals the band had originally set out for. Empyrean is truly a return to form because we are doing what comes naturally to us, but with an intensity that we haven’t achieved in the past. We set out to create something that represents the band and its history in its purest form while also pushing our technical abilities further than we have ever gone.”

Since forming in 2007, Fallujah have triumphed over their challenges. Whether it’s self-administering the band, going to school, writing music, or working full-time, they’ve savored release of and diehard fan admiration for five albums in The Harvest Wombs (2011), The Flesh Prevails (2014), Dreamless (2016), Undying Light (2019), and their latest Empyrean. Indeed, diligence and creative enterprise have resulted in high-profile tours with Whitechapel, Suffocation, The Black Dahlia Murder, and more across North America, Europe, and Australia. Fallujah also prospered with critics in Metal Hammer, Allmusic, and Metalsucks. The group’s Billboard chart positions on the Top Hard Rock Albums (Dreamless, The Flesh Prevails) and Heatseekers Albums (Dreamless, Undying Light) prove that with every twist and turn, Fallujah’s fans are with them. Empyrean, with its revivalist spikes, bolstered atmospherics and high-powered production, is the greatest yet.

“Every Fallujah album has been a reflection of whatever ideas felt the freshest and exciting to us at that particular point in time,” Carstairs offers. “We’ve developed our own defined sound over the years, but on this album, our new members helped bring in some new perspectives. We incorporated new elements such as counterpoint and tempo changes but maintained elements integral to the band and even brought back techniques used in older records. At this point, it’s all about elegantly presenting the sound we have cultivated over the last decade.”

Empyrean is a specialist’s paradise. As a rhythm/lead player, Carstairs enters a league of his own. Tracks like “The Bitter Taste of Clarity,” “Radiant Ascension,” and “Eden’s Lament” illustrate he’s upped his chops and boosted the emotional outlay. Throughout, he’s careful about compositional placement and how his radiant, palliative leads complement Fallujah’s sapid landscape. Drummer Baird tastefully and aggressively holds down the fort, grooving and syncopating admirably on “Radiant Ascension,” “Embrace Oblivion,” and “Mindless Omnipotent Master.” Fallujah’s long-standing timekeeper has always been great, but on Empyrean, he’s superior. Right there with him is recently joined bassist Evan Brewer, thundering and bopping on, around, and against Baird’s foundation like a seasoned prizefighter. “Duality of Intent” is but one of Brewer’s standouts. Although known for his guitar work outside of Fallujah, newcomer vocalist Kyle Schaefer’s low-end and mid-range bark perfectly matches the existential threat-themed lyrics. Empyrean is Fallujah inspired, and as they approach their 15th year, the Americans couldn’t be better.

“Empyrean isn’t a concept album, but there are some recurring themes throughout,” explains Carstairs.

“The first three songs (‘The Bitter Taste of Clarity,’ ‘Radiant Ascension’ and ‘Embrace Oblivion’) all deal with a process of metaphorical rebirth—overcoming personal hardships, finding the right outlook to keep moving forward, and learning to embrace change in a way that makes you stronger for it in the long run. ‘Duality of Intent’ describes the internal conflict between the two sides of your brain, simultaneously craving immediate gratification versus long-term fulfillment and the paradoxical balance that results. ‘Artifacts’ is about the universal human desire to create something that will live on beyond oneself. ‘Mindless Omnipotent Master’ takes a cynical look outward, personifying mankind’s globally-linked networks of societal and technological systems as a giant mechanical beast which has grown beyond our control and now moves of its own accord.”

Fallujah welcome the return of long-time producer Mark Lewis (Whitechapel, Cannibal Corpse) on Empyrean. Under Lewis’s expert sonic tutelage, the quartet advanced on the production milestones that benefitted Undying Light (2019), walking away with an album that sounds incredible at high velocity (“The Bitter Taste of Clarity,” “Soulbreaker”) and when it carries sentimental heft (“Into the Eventide,” “Celestial Resonance”). Fallujah and Lewis recorded Empyrean at MRL Studios in Nashville, Tennessee, over six months. The full-spectrum endeavor was then mixed and mastered by Lewis in seven weeks. The studio sessions weren’t without sacrifice, however. Fallujah worked their tails off to make Empyrean the remarkable reality that it is.

“It was certainly long and arduous,” Carstairs exhales. “Everyone involved had the mindset that it had to be our best work, and because of that, we were incredibly meticulous and hard on ourselves. We were united in our goal and embraced the brutality of committing to it.”

Throughout Empyrean, Fallujah surprise. Musically, lyrically, and with their bevy of guests, they add hard-to-describe depth and musical import. Vocalist Tori Letzler (Batman V Superman: Dawn of Justice) reprises her angelic role on “Radiant Ascension” and “Artifacts,” while Chiasma’s Katie Thompson also reappears to elevate “Embrace Oblivion” and “Into the Eventide.” Chaney Crabb of Entheos and Cyborg Octopus’s David Wu tender their considerable talents on “Mindless Omnipotent Master” and “Duality of Intent,” respectively. Celebrated artist Peter Mohrbacher (Serenity in Murder, Rainbowdragoneyes) replays his role on Empyrean as well. Truly, this is an all-star cast appearing on a momentous album by a band reaching beyond.

“From the beginning of this writing process and until the end, we painstakingly made sure every aspect of this record would blow away our listeners,” states Carstairs. “We meticulously scrutinized every riff and note choice. There has never been this much effort put into a Fallujah record as we did with Empyrean, and the result is a truly monstrous record that we believe is the band’s best work by a significant margin. We showed you restraint on the last record. Now, let us show you what happens when we leave it all on the table.”

Venture into Fallujah’s exosphere on Empyrean. They’re waiting for you.

Check Out Videos from Fallujah
Member(s):
Holy Sh*T, Did You See This?
View All
Recent Featured
View All