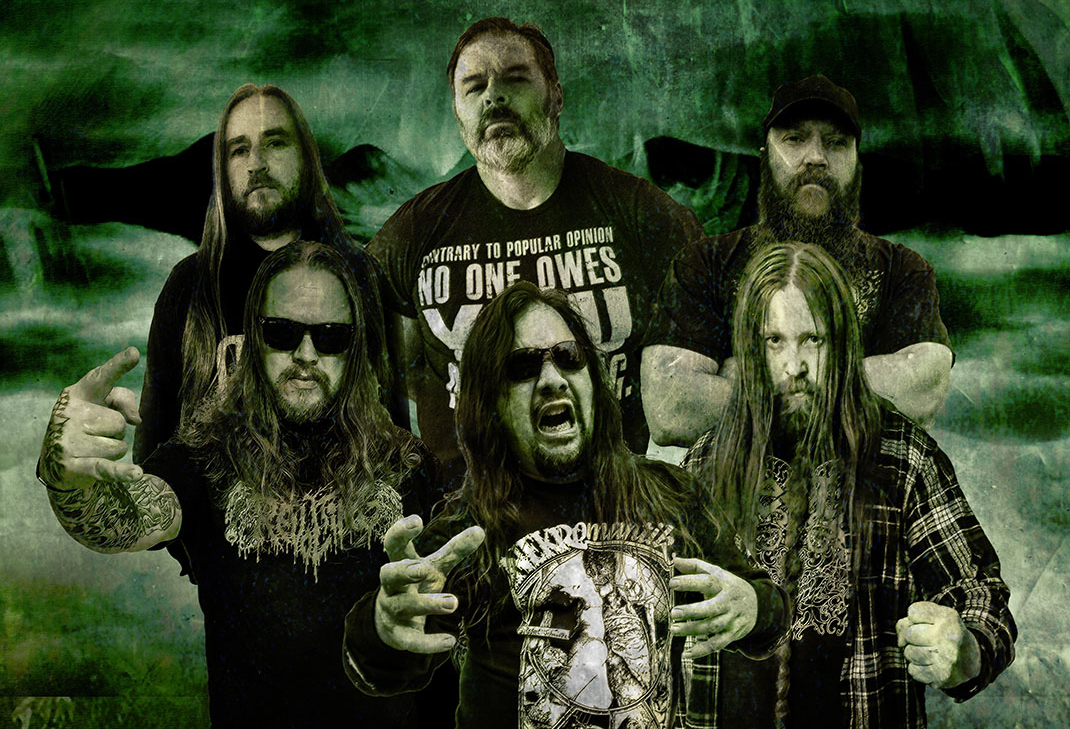 Florida-based death metal legends Massacre are back! Featuring the very same creatures that appeared on the Chamber of Ages (1986) demo, as well as some of death metal’s most prolific and malignant songwriters, new album Resurgence is the perfect soundtrack to the gruesome plague era in which we all reside. That’s right, returning to the fold are vocalist Kam Lee (Mantas, Bone Gnawer) and original bassist Mike Borders. Joining them in their journey between space-time are: inhuman death metal machine Rogga Johansson (Megascavenger, Rib Spreader) on guitars, Jonny Pettersson (Wombbath) on guitars, Brynjar Helgetun (Crypticus) on drums, and solo fiend Scott Fairfax (Memoriam, As the World Dies) on guitars. Normally, we’d call this profane configuration a ‘supergroup,’ but the Great Old Ones have spoken, hailing the new Massacre lineup a ‘stellargroup.’ With cosmic horrors reanimating and Resurgence emanating pure, unadulterated death metal, the Massacre principals couldn’t be more pleased.

“I feel it’s the best it’s been in years,” says Kam Lee dangerously near the abyssal portal outside his Florida home. “Finally working with members and a team that are all on the same page, and no one with their own personal agendas.”

“Considering the current state of the industry, thanks to the COVID-19 mess, we are pretty upbeat,” adds Mike Borders from the summoning circle in his backyard. “Honestly, the album process went smoothly. No ego or issues getting in the way, and I think we are all proud of the results. Now we’re just impatient and eager to get everything released. We’ve been tormenting our fans with teasers for a few months now, and now we are ready to see the reactions.”

Indeed, the power of Resurgence is in its truths. Going back to the trio of demos—Aggressive Tyrant, Official Livetape, Chamber of Ages (all three 1986)—Massacre’s noxious mists have and continue to spread maliciously, causing terror in all who encounter them. The six-piece have retained the nasty nebullic strength and aggression they invoked all those years ago on cult classic debut From Beyond (1991), but multiplied it for Resurgence. Tracks like “Eldritch Prophecy,” “Innsmouth Strain,” “Book of the Dead,” and “Return of the Corpse Grinder” demonstrate Massacre’s commitment to its legacy, allegiance to the almighty metal of death, but the necessary need to move forward and onward. That Lee and Borders flanked themselves by veteran death metallers from across the globe is no accident.

“I’ve worked with all these members for years,” Lee says. “Rogga and Brynjar are in my band The Grotesquery, and we’ve been working together since 2009; we have four full-length albums out and a self-released single. Jonny and I have the band Nattravnen together we have a full-length album out. We’ve been doing this band together since 2015. Scott has been an associate for years, and I did some vocal work with him in his band As the World Dies. So, all these members I’ve known and worked together separately on music projects for years. When we started looking to make new music for a new album, we had a couple of other members, but they aren’t worth mentioning and their involvement isn’t important. When it came down to getting the proper people, I had to reach out to members I knew I could trust and who I felt would be able to bring the proper and correct Massacre sound that was demanded.”

The writing sessions for Resurgence took place across time zones and digital space. Early on, Lee set the direction that whatever mutagenic music jettisoned from the chaosphere it must adhere to the ground rules of Massacre’s “style and aesthetic.” The framework now radioactive stone, the group set out to write not the follow-up to Back from Beyond (2014) but the sequel to From Beyond and the Inhuman Condition EP (1992). Essentially, Lee and Borders wanted to rip out the chapters of Massacre’s grimoire post-1992 to re-fashion a new baleful book of deathly song and words to incorporeal entities. Resurgence is Massacre born again. From the cryptic stardust of the old days to present times, the 10 corpselike opuscules that appear on Resurgence are alimentary food for Massacre’s most ardent, foam-mouthed fans.

“This is what I mean by ‘aesthetics’—certain aesthetics in style and sound, and a particular methodology is important to the style,” says Lee. “It needed to have that represented in the songs. It needs to be old-school death metal without question. So, when the listener puts on any track they automatically recognize the style and sound as being OSDM. It needed to retain a familiarity that the true base fans could reattach themselves to and not feel forced to adhere to. No down-tuning, no incoherent guttural pig squealing, or gravity blasting drum beats. None of the modern clichés or redundant banality of the past albums or attempts to alter the signature style. It needs to capture the essence of style and sound that first established the band’s footprint. That was key to the writing of this new album.”

The studio sessions took place across Massacre’s lineup. Lee recorded his famed vocals at his Gojiden Studios, while the rest of the group holed up in their respective home studios to track Resurgence. Overseeing the nefarious affair was none other than death metal icon himself Dan Swanö (ex-Edge of Sanity, ex-Bloodbath) at Unisound AB, with Pettersson employed as engineer/mix-master rearguard. Together, Swanö and Pettersson co-helmed Resurgence’s production process while Lee marshaled his most ruthless fiends to guest across the 10-song hit-list. Death metal luminaries from across the void answered the call. Indeed, Marc Grewe (Insidious Disease), Dave Ingram (Benediction), Anders Odden (Cadaver), and Pete Slate (Druid Lord) made their infernal mark on Massacre’s brutally crafted songs.

“Dan is the main mix-master on this,” Lee says. “He brought the classic sound to the songs and made sure it retained that OSDM sound. Jonny also played a huge part in the mixing. Rob Reider (The Grotesquery) was key to writing and recording the intro, as well as the sound design for the track, ‘Book of the Dead.’ For Resurgence, I wanted a heaviness that is nice and thick but retains clarity. An old-school sound that doesn’t sound too polished, but not over-produced. We like things to be a bit raw, but I’ve always been a vocalist that growls coherently with enunciation.”

“As we started sending tracks over to Dan—reference tracks, ideas, etc.—we made it obvious on the front end we weren’t going for a modern over-produced and polished sound,” continues Borders. “I think that sucks a lot of the life out of the music. More piss and vinegar, less polish! The album had to sound good, but more importantly, had to sound like Massacre. To do anything otherwise would be a disservice to our fans.”

Artistically speaking, Massacre have always enjoyed sci-fi/horror themes. From the ‘Warp Beast’ that’s adorned several covers to the group’s fearsome lyrics—check out “Devouring Hour,” “Cryptic Realms,” and “Plains of Insanity,” and “Corpsegrinder”—they’ve always followed the inspiring dread of Zoth-Ommog. This, too, holds for Resurgence. Fans of old-school death metal, particularly the American form, will overjoy into oblivion to learn that Massacre has brought on the master of the macabre Wes Benscoter (Slayer, Kreator) to create the H. P. Lovecraft-inspired cover art to complement Lee’s lyrical overtures.

“I felt that Massacre needed to evolve visually and show growth but retain a grounded visual aesthetic that still retained an OSDM feel,” says Lee. “Wes is one the best artist to represent that feeling. Plus, Wes was more than happy to do a full-all Lovecraftian-based art design for this. It’s his first time doing all Lovecraftian-based creatures, and I think he rather enjoyed the freedom to bring his stylistic approach to the Lovecraftian universe by doing this cover art. [As for the ‘Warp Beast’], he may make one final appearance on a special release, and after that be finally put to down into the abyss.”

Massacre’s next steps are to weather the motley murrain that has made the world suffer greatly. Live shows will likely be relegated to festivals when the opportunities arise. The sextet will also try to perform as many live shows as permitted, but Lee warns the live lineup may be different from its studio form. Between, Lee and Borders have already started the songwriting sessions for the follow-up to Resurgence, with songs, lyrics, and themes currently as secretive as Cthulhu’s descendent Shaurash-Ho. If the duo promise anything it’s that Resurgence is for fans deeply devoted to Massacre’s insanity, helplessness, and misanthropy.

“Our loyal longtime fans will instantly get it,” Borders says. “They will be ‘cool, a real Massacre album—not a fake one.’ I hope new and younger fans will hear it and understand what the appeal of that first wave of metal bands was.”

Kam says: “[I want fans to understand] that they just finished listening to pure old-school death metal, presented to them by true real fans and members that respect and honor the genre and the legacy of the band that is true Massacre!”

Check Out Videos from Massacre
Member(s):
Holy Sh*T, Did You See This?
View All
Recent Featured
View All