10 Underrated Hardcore Records of the 2000's 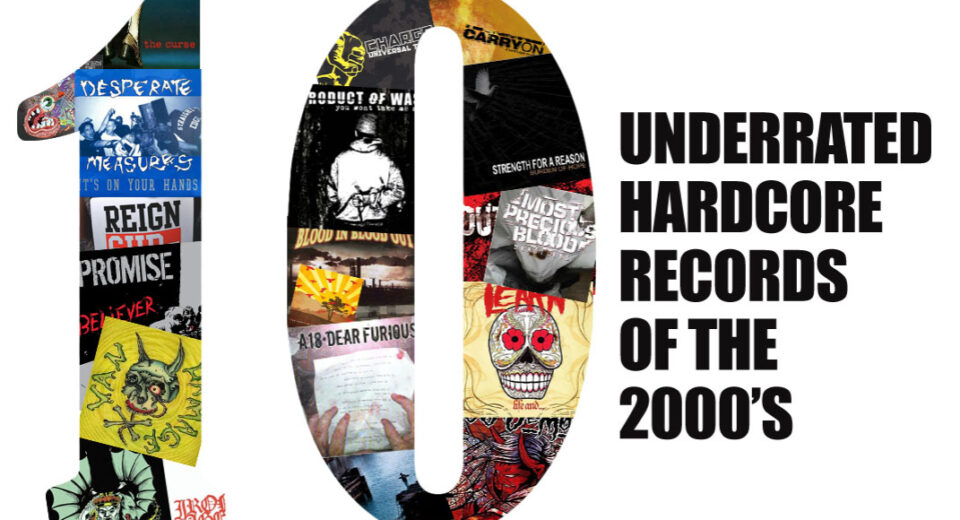 To accurately describe a genre of music over an entire decade is a difficult task. To do exactly that another decade after it’s passed even further complicates things. Regardless, that is precisely what I am hoping to do in this article.

Personally, this was an important era in my life. I wrapped up high school early in the decade (2003), I attended and even graduated college (2005), I worked a few jobs, and I lived a couple places. The only thing that I was consistent with, was my passionate obsession with hardcore. Hardcore was pretty much the only priority in my life. Unfortunately, I’ve yet to fully recover from the effects, but I’m strapping on my rose colored glasses for this one.

Living in South Central Pennsylvania provided me with endless options for hardcore shows. Locally, I had firehalls, VFW’s, skateparks and most importantly Championship Records in Lemoyne, PA. Baltimore was right down the road and Philly was always a reasonable trip. There were waves of metalcore, beatdown, melodic and old school hardcore. I watched kids go from girl jeans to flat brims to Nike dunks and cut off khakis. Clothes were either too tight or too loose. Yet it all fell under the umbrella of hardcore.

I’ve tried to narrow my personal list down to ten records from this very era that didn’t seem to get the appropriate recognition then or now.

Feel free to be outraged, it’s all relative. You’ll notice a regional bias, but I suppose that’s just the way it is. I’m also aware of the complete omission of hardcore outside of the United States, but let’s face it, Europe is always a decade behind and Asia only listens to Bulldoze.

Let’s get right into that regional bias I just mentioned. Van Damage was force fed to us locals via the aforementioned Championship venue. Initially I didn’t fully appreciate what was being offered, but after grabbing their self titled 7” I began to see the light. By the time the Gravedigger LP dropped I was all in on Van Damage. An old school flavor with a new school feel, Van Damage had a distinct sound when hardcore was either heavy or melodic. There were countless bands that sounded like different versions of Hatebreed or American Nightmare, but only one that reminded me of Redemption 87/The Nerve Agents. Sure, a lot of that was in the similarities in the vocal delivery, but Van Damage added that unique approach with the high energy Jersey shore style hardcore that was starting to emerge to create a sound just different enough to captivate me.

Here’s a band that might be a surprise to see on this list. Nothing In Vain received it’s deserved amount of fanfare in 2001 following the bands transition from the Indecision moniker. Then there were some defectors on Our Lady Of Annihilation (2003), but despite the change at vocals, most stayed on board. Merciless presented a much more polarizing effect to Most Precious Blood’s fanbase. The inclusion of relatively light electronic elements had people demonizing the record from the drop. The NYHC faithful turned their cheek, but the band was always a metallic fingernail clipping outside of that grasp. Those that jingled their key carabiners and smeared their eyeliner two years prior to Bleeding Through’s This Is Love, This Is Murderous had already moved on. Merciless filled an unappreciated niche. It is unapologetic in heaviness and progressive within the confines of the genre.

Desperate Measures called D.C. their home and their sound absolutely reflected that. They captured that late 80’s rawness prevalent in D.C. and New York and injected the anthemic lyrical flavor of H20, but ditched the polish. It’s arguable that their follow up Never Enough Time (2003) is the superior record, but for nostalgic reasons I’m sticking with It’s On Your Hands. I remember buying the two song promo cassette and being taken aback by somewhat corny lyrics about friends and family. However, at the time I was balls deep in a hodgepodge of Rancid, Machine Head and Staind, so the relatable bare handed nature of the recording, simplistic song structures, and lyrical content grabbed my attention in a whole new way. It’s On Your Hands showed me the essence of hardcore. The whole idea of…you don’t have to be good to be awesome.

“Jailhouse Rob”, the opening track of Dear Furious, may be one of my favorite hardcore songs ever. No one seems to have ever cared about A18, but there are some serious gems on this record. The fact that it was released via Victory Records seems odd because of its staggering lack of popularity. In hindsight, A18 may have been entirely off brand for what was largely passing as hardcore in 2004. They were straight forward, pissed off and heavy without playing obnoxious breakdowns. Don’t believe me? Give one listen to “Stab You Through the Everything” and write me an apology letter.

Product Of Waste - You Won't Take Me Alive (Frequency Deleted 2008)

Product Of Waste came in at the end of the decade with an attitude that most bands from the suburbs wish they had. You Won't Take Me Alive somehow combined traditional straightforward hardcore with street culture that has never been matched. Most of that was due to vocalist Terry Iovino. T as he was known, had a heavily accented vocal style and had actual rhythm and it is the first thing anyone will notice when they listen to POW. Lyrically, they hit the right notes as well. In an era where hardcore had veered towards the introspective and vague, T and POW spoke clearly and plainly about social injustices. Unfortunately, T died at the age of 26 in 2013 and the underground was robbed of an important voice.

Another Rhode Island band? Yeah, it turns out their is more than enough room for two. Though I don't remember if Learn and POW co-existed. Regardless, Learn's Life And... was one of the terrific records dropped on Malfunction Records, among the most consistent labels of the era. While we were being inundated with melodic hardcore from every corner of the country, Learn took that approach and added a little of that familiar Holy Terror style emanating out of Cleveland and healthy dose of "fuck you." It's that last bit, the decision to be a bit edgier than their pandering peers who stood up against imaginary sweatshops that made Learn stand out.

No matter how much credit they get, Pennsylvania's Strength For A Reason will forever be an underrated force of pure hardcore. They're well respected in their home state and that seems to be the case in Europe as well, but mostly due to their first two albums, Show and Prove (Thornz 2001) and Blood, Faith, Loyalty (Spook City 2005). In 2009, SFAR, now over a decade old, delivered a ten song album packed front to back without any filler. These guys always seem to be incorrectly pigeonholed as some kind of tough guy bullshit, but there is every element of what makes hardcore fun for everyone on Burden Of Hope.

Charge caught me off guard in 2004 and when I play Universal Tribe in 2022, they still do. There were a lot of comparisons being thrown around at the time, namely Bad Brains, Rage Against The Machine and Burn. All rightfully so. I still hear those influences when I listen to this record, but for me it was always the "tribal" percussion elements that made this record so refreshing and quite frankly, just different from the rest of what was out there in 2004. The title track has definitely gotten the most play from me over the years, but now as I listen 16 years later, "Dem Troopers" sounds as though it could have been released yesterday. Charge did a couple things after Universal Tribe, but this record is them at their best.

My opinion of what many have come to know as "girlfriend hardcore" seems to change depending on my mode and the amount of sunshine I've seen in any number of days, but since getting their demo and catching them with Go! For The Throat in the early 2000's I've been a big fan of Philadelphia's The Curse. As far as I know, their entire discography consists of that six song demo, this EP, and a couple tracks on The Philadelphia Sound 10", but The Curse seems largely forgotten about and that's a shame. This is fantastic melodic hardcore whether your girlfriend likes it or not.

The Promise featured ex-members of Another Victim, Turmoil, One King Down, Earth Crisis, and few other awesome bands of the previous era, so there was no excuse to release a shitty LP when they dropped Believer on us in 2002. They emphatically delivered with their one and only album and maybe that's why it's looked over. There isn't anything to pick apart here, The Promise was as straight forward as it got in a scene that was acting like a confused teenager. Maybe they got exactly what they wanted, and they probably don't care, but this band came and went in what now seems like a flash.