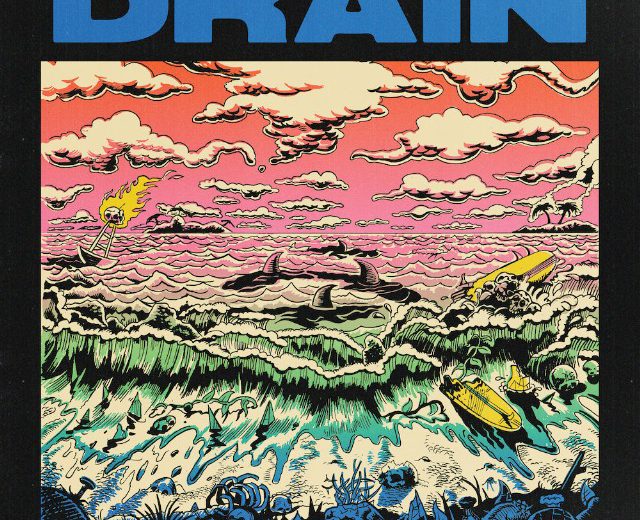 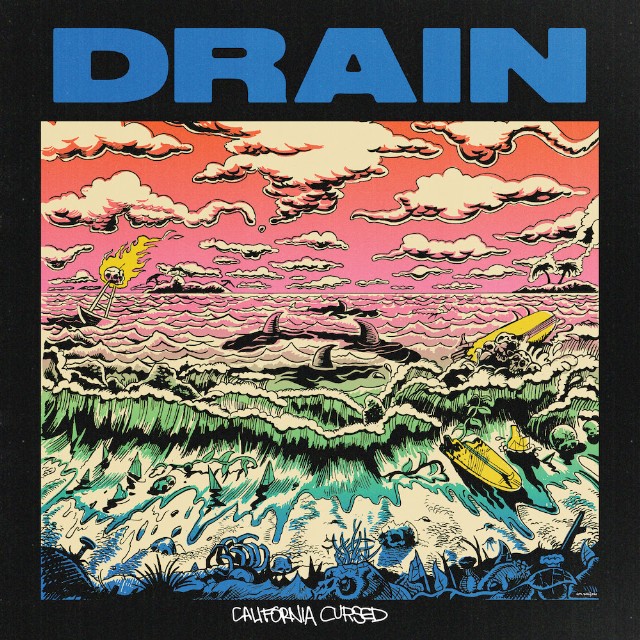 I walk out of my beach shanty right as Jimmy’s red convertible pulls up, filled with all the bros. We’re all dressed alike in leather jackets, no shirts, and multi-colored bathing suits. I throw my surfboard in the pile and jump in the back. We’re listening to this record to get pumped to smash some kooks that will no doubt be intruding at our surf spot while screaming “locals only” before getting pitted in some gnarly barrels. We’re a bunch of fun guys with a violent streak.

That could be my whole review, and I think it sums up this record enough. However, I love it so much I’m going to keep on talking about it.

Drain is heavy, fast, and angry, but there is an underlying “fun” feeling that runs through their music. Despite the fun feeling, it never gets cheesey. It feels very California, but it will have you wanting to bring the spin kicks. I would call it California metalcore, but I think that will bring up shades of Unbroken, which is not accurate. Drain’s sound is Cali-feeling thrash metal with breakdowns and hardcore parts.  Despite the art of their 2018 promo (google it, it’s amazing) and the huge smile on singer Sam Ciaramitaro’s face when they play live, the lyrics are pretty serious. Even though you can jam this at a party, the lyrics aren’t goofy or trying to be funny.

I like that all of these songs have a lot of parts and tempo changes to keep you on your feet. Drain does this masterfully. The opening song, “Feel the Pressure”, starts with a headbanging metal riff and goes right into bouncy hardcore part pretty seamlessly. “Character Fraud” has a breakdown it that throws thrash parts in the middle of. You’re moshing and they start thrashing, which while listening, pumps me up for the next breakdown by instilling in me a happy anger.  “Sick One” is a ripper of song at first before hitting you with a breakdown that eventually breaks down even slower (0:41). I know that’s not a new trick, but when I saw them at FYA fest this year and they hit that part, you could audibly hear the crowd give a Rick Flair “wooo” (check out the set on Youtube, you can hear it). I did it too. I didn’t know anyone else was going to do “woo”, the part just caught me and was my natural reaction. I heard people talking about that after their set. This just shows that even when Drain uses tried and true tricks of their genre, they do it in a way that keeps people interested.

It’s not all thrashing and smashing for Drain. “Hollister Daydreamer” serves as a nice interlude. It’s an instrumental with a guitar playing an arpeggio while another guitar rips a creepy solo over it. You’ve heard Integrity do this, which is not a knock. I love this shit. As soon as that cuts, “White Coat Syndrome” kicks in with an assbeater of a riff, so you’re moshing again.

It’s hard not to root for Drain if you ever see them live. At FYA fest, the singer was so pumped the entire time and seemed so stoked and thankful that anyone would give their attention to “a little band from a little beach town in California” (the quote was something close to that). People were going off, and he could have gone the cocky route. Instead, he was just super thankful and stoked on the reaction.

California Cursed, as a whole, is what I look for in a hardcore record: songs with multiple parts, tempo changes, energy, and variety. I’ve listened to this album 4 times in 2 days to write this review, and I’m going to keep on listening to it. I recommend checking it out.